1.3.5 Set of all languages over some fixed alphabet

Question: Are the languages over $\lbrace 0,1 \rbrace$ countable?

Answer: No. Proof by Diagonalization (a table of $m$ strings $\times$ $n$ languages):

Suppose we could enumerate all languages over $\lbrace 0,1 \rbrace$ and talk about “the $i^{th}$ language.”

We have a contradiction: $x$ is neither in $L$ nor not in $L$, so our sole assumption (that there was an enumeration of the languages) is wrong. $\blacksquare$

This is really bad; there are more languages than programs:

Picture of a Turing Machine:

Why Turing Machines? Why not represent computation by C programs or something like that?

A TM is typically described by:

Instantaneous Descriptions of a Turing Machine:

There are actually two ways to define the language of a TM:

Equivalence of Accepting and Halting:

Proof That $L_u$ is Recursively Enumerable (RE), but not Recursive:

3. Extensions and properties of Turing machines @ Automata by Jeff Ullman

Programming Trick: Caching in the State

How a TM can simulate a

17.4 Closure Properties of Recursive and RE Languages

Rice’s theorem: tells us that almost every question we can ask about the recursively enumerable languae is undecidable. 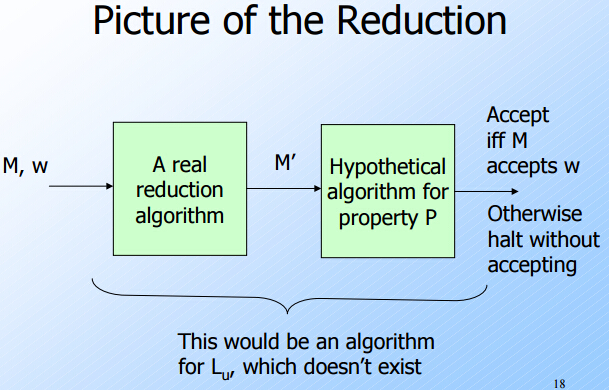 Admittedly, Turing machines are a terrible model for thinking about fast computation; simple operations that take constant time in the standard random-access model can require arbitrarily many steps on a Turing machine. Worse, seemingly minor variations in the precise definition of “Turing machine” can have significant impact on problem complexity. As a simple example (which will make more sense later), we can reverse a string of n bits in $O(n)$ time using a two-tape Turing machine, but the same task provably requires $\Omega(n^2)$ time on a single-tape machine.

But here we are not interested in finding fast algorithms, or indeed in finding algorithms at all, but rather in proving that some problems cannot be solved by any computational means. Such a bold claim requires a formal definition of “computation” that is simple enough to support formal argument, but still powerful enough to describe arbitrary algorithms. Turing machines are ideal for this purpose. In particular, Turing machines are powerful enough to simulate other Turing machines, while still simple enough to let us build up this self-simulation from scratch, unlike more complex but efficient models like the standard random-access machine.

(Arguably, self-simulation is even simpler in Church’s $\lambda$-calculus, or in Schönfinkel and Curry’s combinator calculus, which is one of many reasons those models are more common in the design and analysis of programming languages than Turing machines. Those models much more abstract; in particular, they are harder to show equivalent to standard iterative models of computation.)

In other words, given encoding of $M$:

Theorem 1. There exists an decompression algorithm $ U $ which is asymptotically not worse than any other algorithm $ V $.

Such an algorithm is described as asymptotically optimal.

The construction of optimal decompression algorithm:

An encodings-free definition of complexity:

We could, alternatively, choose an encoding for Turing machines $\langle M \rangle$. If $ M $ is a Turing Machine which, on input $ w $, outputs string $ x $, then the concatenated string $\langle M \rangle w$ is a description of $ x $.

Any string $ s $ has at least one description, namely the program:

The length of $ P $ is a constant that doesn’t depend on $ D $. So, there is at most a constant overhead, regardless of the object described. Therefore, the optimal language is universal up to this additive constant. $\tag*{$\square$}$

In the following discussion, let $ K(s) $ be the complexity of the string $ s $.

Theorem. There exist strings of arbitrarily large Kolmogorov complexity. Formally: for each $ n \in \mathbb{N} $, there is a string $ s $ with $ K(s) \geq n $.

Proof: Otherwise all of the infinitely many possible finite strings could be generated by the finitely many programs with a complexity below $ n $ bits. $\tag*{$\square$}$

Theorem. $ K $ is not a computable function. In other words, there is no program which takes a string $ s $ as input and produces the integer $ K(s) $ as output.

There are $ 2^n $ bitstrings of length $ n $. The number of descriptions of length not exceeding $ n-c $ is given by the geometric series:

We know that, in the set of all possible strings, most strings are complex in the sense that they cannot be described in any significantly “compressed” way. However, it turns out that the fact that a specific string is complex cannot be formally proven, if the complexity of the string is above a certain threshold.

Theorem. There exists a constant $ L $ (which only depends on the particular axiomatic system and the choice of description language) such that there does not exist a string $ s $ for which the statement

can be proven within the axiomatic system $ S $.

$NP = \lbrace \text{problems that can be solved by a nondeterministic TM in poly time} \rbrace$.

Claim: for $\text{NP}$, the witness-checking definition and the NTM definition are equivalent.

Claim: all finite languages are in $P$.

Proof: A finite language is a finite list of all yes-instances. Build an algorithm to compare input to this list and running time is bounded. $\tag*{$\square$}$

Oracle computations and a characterization of PH (Lecture 16 & 17)

Let $A$ be some decision problem and $M$ be a class of Turing machines. Then $M^A$ is defined to be the class of machines obtained from $M$ by allowing instances of $A$ to be solved in one step.

Proof: By induction on $k$.

For simplicity, assume that each thread of $M^{\ast}$ makes only 1 query to the oracle. Define an existentially quantified variable $y_1$ that include all computation threads of $M^{\ast}$.

CASE 2: on accepting thread $y$, oracle answer is NO.

We can construct an algorithm for $A$ using poly time:

Proof: Define a recursive algorithm Path(a,b,i) to seek “is there a $a \rightsquigarrow b$ path whose length $\leq 2^i$?”

$\text{#P}$-completeness of the permanent (Lecture 22)

How to amplify $\text{BPP}$ algorithm?

Question: Does it help to have a different algorithm for each input length?

We can imagine $ST$, $HD$ and $TP$ as 3 circuits. They must be consistent with $M$’s transition function and tape cells. We can check the consistency in poly time.